Mt. Makalu is recognized as the hardest and technically difficult mountain to climb among the 10 highest mountains with more than eight thousand meters height. With 8463 meters altitude, Mt. Makalu is the world’s fifth highest mountain and is located in Barun National park merely 20 kilometers away from Mount Everest.

Considered as the world’s toughest mountain climbing destination, the geographical features of Mt. Makalu plays the significant role. The mountain is notorious due to its steep pitches and edgy ridges for the mountaineers to even have the good hold of their grounds, while the final ascend towards the summit is dramatic with its final shape being a four-sided pyramid that requires professional rock climbing skills. Thus there are lesser crowds who are willing to carry with measuring the summit of Mt. Makalu.

Himalayas Hiking provides you with mountaineering services that include highly skilled climbing guides as well as the training session for mountaineering to gain experience for the beginners before facing the giant Mt. Makalu. The climbing consists of glacier walks low in the mountains, then steep ice and snow climbing to Makalu la which requires climbing equipment. You should always follow the instructions and guidance of the experts. Each climbing day is set with reasonable length and difficulties. Mt. Makalu is situated in isolation the Mahalangur Himalayas 20 km southeast of Mount Everest, in the border between Nepal and China.

The trek begins with a short flight from Kathmandu to Tumlingtar. You will get time to acclimatize with the progression in the trail through some of the hidden villages like Num, Sheduwa, Tashi Gaon , Khongma, Mumbuk, Yangri Kharka, Sherson and finally Makalu base camp (4870m). These villages are heavily settled by the Rais and Sherpas. The slow ascend helps to acclimatize properly before reaching the base camp. The higher you travel, you will observe less density of population most of whom are from Tibetan ethnicity. The main religion is Buddhism and its traditional cultures in this region.

While climbing, there will be four camps that will be utilized on the mountain, each camp with separate purpose – camp I and camp II for acclimatization purposes and the remaining two for the summit push, going directly starting from Camp II all the way to camp III. You will then ascend to camp IV as the shorter expedition day and to very low base camp, Advanced Base Camp camp at 5500m, Camp 1 6,500m, Camp 2 at 7,300m trek to the bottom of Southeast summit ridge and final 7,900m of Camp 3 and a high camp.

Day 1: Arrival in Kathmandu. Transfer to your hotel

Day 13: Trek to Hillary Base Camp

Day 14: Trek to Makalu Base Camp

Day 50: Trek back to Yak Kharka

Day 56: Fly to Kathmandu. Transfer to your hotel

Mt. Annapurna is a chain of peaks that spread 55 km wide with the highest point Annapurna 1 – the world’s 10th highest

Summit of Mt. Everest, most likely people all around the world try to imagine and dream how it feels like to be 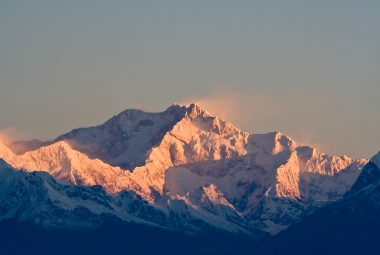 Mt. Kanchanjunga is the third highest peak in the world with a height over 8585m. Located in beautiful terrain of the eastern