Mt. Annapurna is a chain of peaks that spread 55 km wide with the highest point Annapurna 1 – the world’s 10th highest summit that stands 8091m precise. The Annapurna massif is located in a spectacular setup, east of a great gorge cutting through the Himalayas by the Kali Gandaki River, separating it from the Dhaulagiri massif 34 km on the west.

The mountain was pretty hidden from the outer world up till 1949, the first glimpse of Annapurna was viewed by the foreigner from an aircraft. A year after in 1950, French team measured the summit for the first time despite several difficulties, Annapurna became the first peak over 8000 meters to be explored till the summit. Since then the mountaineers around the world are attracted towards this beautiful mountain for various purposes – long and short trekking and also for climbing. It is very popular for world class trekking circuits and routes. There are several new routes discovered every year keeping the excitement to maximum level.

Home to numerous world favorite trekking trails, Annapurna expedition provides the supplementary values to the whole journey. The tiring expedition is filled with spectacular setting and humble human touch as you pass through numerous villages of Gurungs, Magars and other ethnic groups.

Including Gangapurna and Annapurna South, the Annapurna massif consists of four different summits among which Annapurna South is recognized as the most difficult one with some of the steepest terrains. Although the steeps are spectacular and alluring, the massive size is the main concern and dangerous for human survival. As the mountaineers say, ‘the top is the beauty but the ugly side is to climb back down, the steeps are riskier while descending.

And at Himalayas Hiking your safety is our top priority. We provide you the best mountaineering services that include the highly skilled climbing guides and training and support for mountaineering to gain experience.

Time and tide wait for no man. So does the mountains.

Day 2 :Kathmandu – Sightseeing and applying for Permits for expedition

Day 42 : Trek back to Thulobogin

Mt. Makalu is recognized as the hardest and technically difficult mountain to climb among the 10 highest mountains with more than eight

Summit of Mt. Everest, most likely people all around the world try to imagine and dream how it feels like to be 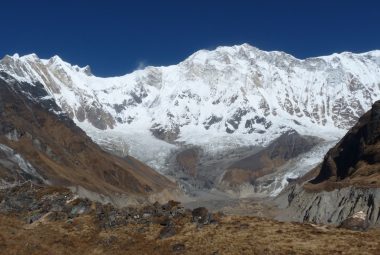