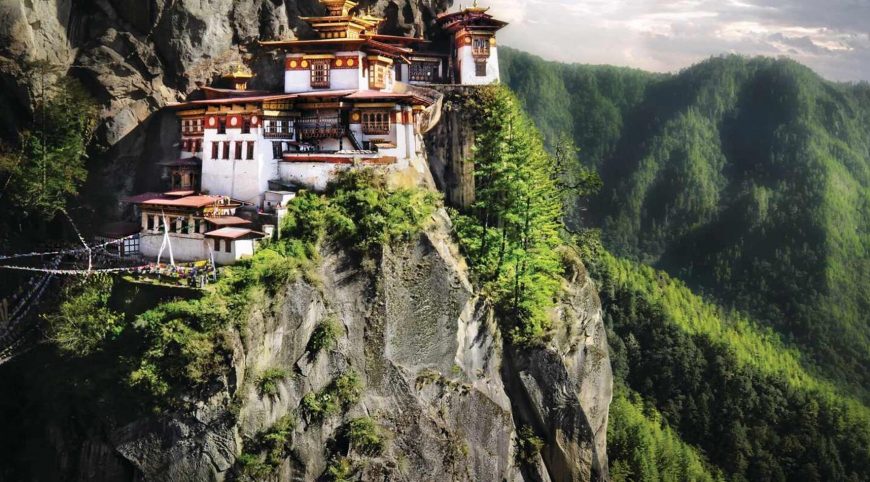 Everyone going through this article must have heard about the small and alluring Himalayan country – Bhutan. It is a beautiful landlocked country placed in the laps of Himalayas and is often regarded as a treasure of Buddhist art, culture, and tradition. Also popular as the land of Thunder Dragon, Bhutan is a traditional country that has slowly embraced the global developments without affecting its originality and uniqueness in terms of culture, tradition, and lifestyle. Situated in between two giant nations i.e. India and China, the country has been able to maintain its separate identity with its natural glory, Himalayas, authentic culture and Buddhist religion.

The varied landscape of Bhutan makes it even more alluring. From lush subtropical plains in the south, the country’s landscape extends to the sub-alpine Himalayan mountains in the north. The peaks in Himalayan regions rise above the height of 7000 meters. Gangkhar Puensum is the highest peak in Bhutan but it is the highest unclimbed peak in the world. Owing to its geographical variation, the country is remarkable in terms of biodiversity (floras, faunas, birds, mammals, and butterflies).

Bhutan is the only remaining Buddhist kingdom in the world. Vajrayana Buddhism is practiced in this country, which is a unique religion of its own kind. No wonder, the country is adorned with different artistic monasteries, gompas and Buddha statues. There are many monasteries that date back to ancient time but are still well preserved and maintained. The Bhutanese people are known for their calm and friendly behavior. They lead a simple life and have a very rich culture, tradition, and festivals. Their traditional dress is so colorful and vivid. So, is their custom, festivals, lifestyle, and wonderful heart.

There are mainly four aspects to be explored in Bhutan as a tourist: unspoiled spectacles of mother nature, unique Buddhist religion, local people and pristine environment.

Bhutan is a beautiful country nestled in laps of Himalayas. Owing to its geographical variation, the country extends from subtropical plains in the south to sub-alpine Himalayan mountains in the north. Bhutan is one of the authentic places untouched by any kind of modernization. The place has some strict traveling policies that have allowed this place to preserve its natural richness intact. The parks and conservation areas in this country is a home to varieties of biodiversity. Being a Himalayan country, the Himalayas are the major attractions of this country. Besides, the natural serenity, lushness and off beaten trail along the isolated routes are other distinctive features that make Bhutan one of the best and exotic places to travel around the world.

Buddhism is dominantly prevalent in Bhutan. It is very different than Tibetan Buddhism. Vajrayana Buddhism is practiced in Bhutan which is a unique religion of its own kind. During your visit to Bhutan, you can get some knowledgeable insights on Buddhist religion, people, their tradition, culture, lifestyle and respect towards their religion. Monasteries and convents are spread over the Bhutanese territory. There are many artistic monasteries over the state which are the best places to visit around Bhutan. Your heart will be at ease to see the art, culture, and piousness within the peacefulness of the monasteries. Monks and nun in the monasteries are distinguishable with their shaved head and maroon robe attire. The symbols like prayer wheels, prayer flags, ritual monuments, sacred mantras, chortens, etc. reflect the prevalence of rich Buddhist religion.  Similarly, the dome structure with spires and Buddha’s eyes spread in all direction, there is so much uniqueness in this religion. Prior to the Vajrayana religion, Bon religion was practiced in this country.

Bhutanese people are renowned around the world for their warm hospitality and cheerful faces. No matter in what mood they are, you can expect a smile in return from them. People live a very simple and traditional life. You can rarely see the touch of other world modernization here. People are dressed mostly in their traditional attire and are well mannered. They are always ready to help whatever the circumstances. So, if you are traveling to Bhutan, interact with people! You will be rewarded with some precious smile full of warmness.

Bhutan is a very clean country where you can breathe fresh air wherever you go. The country has a low population and lacks the factories and other waste-producing businesses that pollute the environment. Therefore, the country is very much cleaner. Moreover, the lush hills, forests and untouched wilderness allows us to walk through a pristine path throughout the trekking and tour journey. Enjoy the energetic vibes of walking through a pristine environment as you become a part of Bhutan tourism.

Bhutan was an isolated country-restricted for foreigners until 1974 when the government of Bhutan opened its country for tourism as an initiative to raise its revenue and promote the unique culture of Bhutan to the world. Though the country is opened for tourists, the country is well aware of the environmental impacts that the tourists can bring. Hence, the tourism policy of Bhutan is very strict. All the plans, itinerary, accommodation and days of stay should be preplanned and pre-paid through a licensed tour operator in Bhutan. There is also a minimum spending threshold for an individual or couple coming to this country in different seasons.

Bhutan being a country with natural and cultural excellence, it has a huge potential for tourism. The existing potentialities for tourism in Bhutan include:

Bhutan is a fantastic place for sightseeing tours and cultural exploration. The country holds the pride of having eight UNESCO listed heritage sites. The unique Buddhist religion, culture, tradition, and many historical places in Bhutan offers different choices for sightseeing tours and cultural exploration around Bhutan.  You can have the best experience enjoying the authentic culture and warm hospitality or Bhutanese people. A glimpse of Bhutan Tour is one of the best sightseeing tours in Bhutan. You will be transferred to some wonderful locations like Paro, Thimpu, Punakha, Wangdi, etc. where you can visit places like Takshang monastery, national museum, Drugyel Dzong, Shabdrung Nawang Namgyel, Victorious Bhutanese Fort, Memorial Chorten, Botanical garden, Punakha Dzong, etc.

If you are willing to go to some isolated sections enriched with biodiversity, natural lushness and exotic mountains, trekking in Bhutan is the must option for you. You can indulge yourself into a scenic walk through a heavenly place also considered as a natural paradise. The picturesque mountains, lush valleys, and appropriate atmosphere make Bhutan a place to visit and trek. You can reward your eyes with some spectacles of mountains and Himalayan glory.

Why trekking and hiking in Bhutan?

Some most popular trekking journeys in Bhutan are

Bhutan Tourism is flourishing day by day. The country is visited by many tourists in the touristic season. Generally, June to September marks the monsoon season. The country receives heavy rainfall and the humidity is very high. Similarly, during autumn season i.e. October to November, it’s quite sunny with snow only in high elevation regions. Late November to March is a little dry with some pre-monsoon shower. Therefore, the best time to visit Bhutan is March to May i.e. the spring season. During this season, the valleys become vivid with flower blossom. One can get some clear and spectacular views of mountains and even the temperature with being moderate. For trekking, one can also opt for the autumn season.

How to get a Bhutanese visa?

The visitors around the globe except for the nationals from India, Bangladesh, and the Maldives require a valid visa to travel in Bhutan. Nationals from other countries need to obtain a visa clearance prior to their entry in Bhutan. Visa is processed online by a licensed Bhutanese tour operator directly or through any other foreign travel agent.

Send a photocopy of your passport to your tour operator so that the operator can apply for your visa. Once the full payment for your travel days in Bhutan is made and money is received by TCB bank, the visa application will be processed by Tourism council of Bhutan and visa clearance letter can be obtained. You need to show the clearance letter at the airport. After showing the letter, the visa will be duly stamped at the airport.

How to go to Bhutan via Nepal?

If you are traveling to Bhutan via Nepal, you need to inform your travel agent early. The travel agent will process for all the documents required to get a Bhutanese visa. Once visa clearance is obtained, a direct flight from Kathmandu to Paro takes you to Bhutan. You can combine Bhutan treks and tours with any travel activity in Nepal.

For more queries related to Bhutan Tourism, feel free to contact Himalayas Hiking. We also organize and run Bhutanese Treks and Tours to fulfill your lust for nature, travel, and exploration.